Introduction: The geological and paleontological record have revealed that impacts of large extraterrestrial bodies may cause ecosystem devastation at a global scale [1], whereas smaller impacts have more regional consequences depending on their size, impact angle and composition of the target rocks [2]. Approximately 200 impact structures are currently confirmed on Earth and each year a small number is added to this list but only nine verified impact craters have been detected on the South American continent despite its large area [3]. Here we provide evidence of a large, buried impact crater, the Cali Crater, located in western Colombia (Fig. 1) and dated to mid-Pliocene, i.e., 3.28 ± 0.07 million years.

The impact crater and the local geology: The Cali Crater is located in the Cauca Sub-Basin between the Western and Central Colombian Cordillera, SE of Cali, in a geologically complex and tectonically modify area Fig 2 [5]. Using seismic data we determine the outer ring of the buried Cali impact crater has major axis of 36 km and a minor axis of 26 km. The morphology, hydrology, and minerology of the region has been modified by the impact event. The Cauca river crosscuts the impact crater in a North-South direction. The target rock was composed of interbedded lithic sandstones and quartzites.

The Calitites: 550 individual tektites were collected for this work. They are associated with alluvial fan deposits along a 240 km stretch in the Cauca river valley, suggesting that they were carried down from the cordilleras [6]. The Cali crater is located in the middle of the area of tektite distribution. The tektites are ~1–15 cm, subangular with well-developed pits and some with striations and banding (Figure 1). They are composed of greenish to brownish translucent heterogeneous glass with bubbles and glassy inclusions and bubles (Figure 1), and in some cases iron particles are present [4]. The bulk composition of the tektites is 70–77 wt%
SiO2 and 13–20 wt% Al2O3. These were already described as tektites by Barnes (1958)[7], but then grouped with Peruvian tektites/obsidian of different ages and collectively called “Americanites” [8]. Locally the tektites are presently called, “Colombianites” or “piedra de rayo” (lightning stones). The tektites have
also in more recent scientific publications been called “Colombianites”, and interpreted as obsidian, volcanic glass, from the Paletará Caldera [9]. However, their age and Sr-Ca and Mn-Ti relations do not match locally formed obsidian. Due to these circumstances we avoid using these previous names and designate the tektites Calitites denoting their origin being tektites and their direct link to the Cali impact crater. As noted elsewhere [10–11], the chemical composition of tektites is strongly controlled by the composition of the target rocks. Further, the internal structure and surface, and internal texture of the Calitites support an impact origin. Thus, we strongly propose that the origin of the tektite-strewn field is related to the Cali impact. 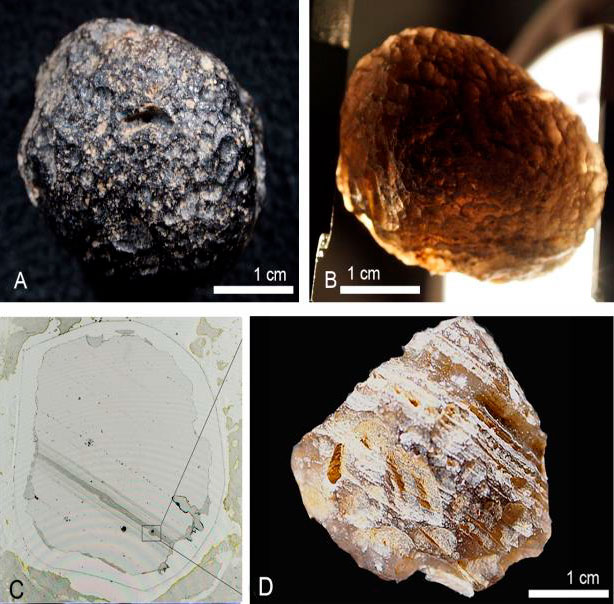 Dating of the Calitites: Fragments from three tektites were dated using 40Ar/39Ar geochronology (see material and methods in Supplementary Information). These measurements yield plateau ages at 3.22 ± 0.07, 3.23 ± 0.06 and 3.29 ±0.02 Ma with a weighted mean of 3.25 ±0.04 Ma (all errors at 2􀁖 (see [4] for detailed information). The age of the Calitites correlates well to
age of the core samples recuperated from the Cali crater site.
Fig. 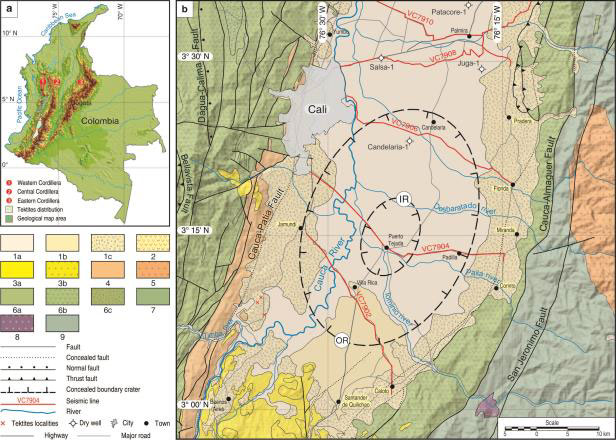 Acknowledgements: We acknowledge the support from NASA Planetary Science Division (AO). The research was jointly supported by the Swedish Research Council (VR grant 2015-04264 to VV; 2008–
3447 to AS) and the Lund University Carbon Cycle Centre (LUCCI). Financial support was received through grants from the Swedish Research Council 2008–3447 (AS). We acknowledge the support of the Colombian Geological Survey (SGC) for financial support for fieldwork, especially Director Dr. Oscar
Paredes).