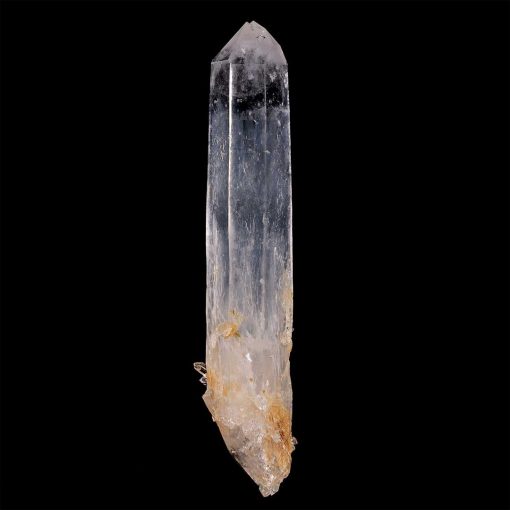 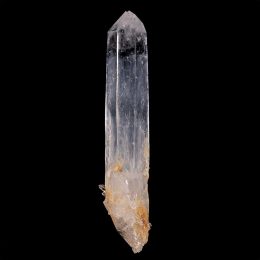 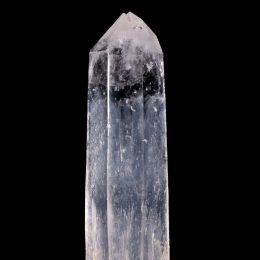 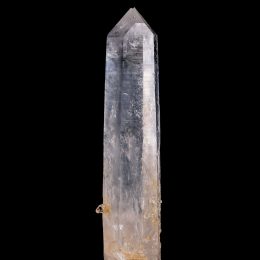 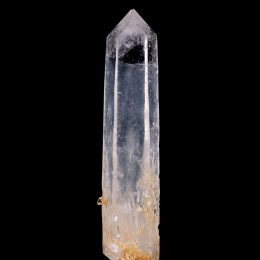 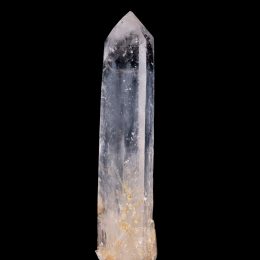 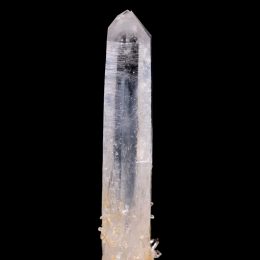 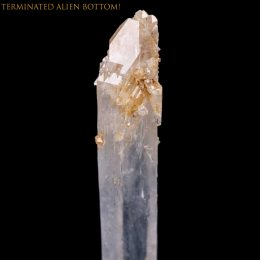 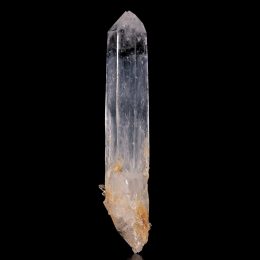 This specimen is a Blue Smoke Halloysite Included Silver Light Laser Wand Colombian Quartz Crystal! It has fantastic clarity, incredible silver light luster, and intricate Starbrary etchings with subtle striations as well as stellar laser form!! The yellow color comes from the Halloysite, and the whisps of blue smoke is a form of lithium called Cookeite. This particular piece has babies all along the body with bridging and a Terminated Alien Bottom (multi- terminated)! Colombian Quartz has been tested as the most pure quartz in the world! This crystal is in excellent condition. Check out the video just above!

Silver Light Quartz runs at one of the highest vibrations of all the quartz based families. Meditating with these crystals raises ones consciousness and brings clarity and balance into all aspects of life. This crystal helps one access the Akashic records, increases clairvoyance and psychic abilities. This is a crystal of reflection – It helps one reflect upon “relevant” lessons from past lives, and help to apply them to this life in a balanced light filled manner. Silver Light Quartz helps us seek and attain purity of thought, emotions and desires. These special crystals are masterful co-creators and are extremely willing partners for crystal programming, manifestation and conscious intent syles of work.

Silver Light Quartz forms in all sorts of Quartz Configurations – Laser Wands, Tabular, Clusters and many more. These Silver Light varieties may be considered as being the master crystals for their archetype. This crystal family inspires one to work with a strong sense of nobility and perform a great variety of selfless acts for the betterment of all.

Used in elixir form, Silver Light Quartz crystals assist in detoxification of the physical body. It amplifies all other elixirs it is used in conjunction with. This elixir raises consciousness to the highest possible elevation, helping one cut through the clutter of modern life, enabling one to focus on assisting the human race to raise and expand the general consciousness pool.
Summary

Read more Regarding Silver Light Quartz Properties at the link below (will open in a new tab/window)….

Starbrary crystals are crystals that have markings/glyphs on the side. They are crystals that have stored information within them.  This information was seeded by star people that visited the planet eons ago. The information will be released to the crystals new guardian  via both subconscious, or conscious methods. Meditation is the most likely way to gain access, but so too can reading them by running ones fingers over the glyphs, reading it in a braille like fashion. The glyphs themselves can take many interesting shapes and are etched upon the crystal itself – usually the sides, in rare cases, on the termination faces as well. Shapes that maybe encountered can be triangles, squares, rectangles, circles, lightning type zig zags, or even combinations of them all!